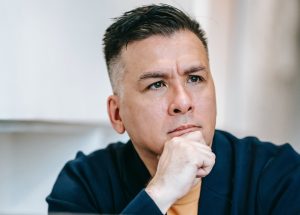 Despite a formal education that ended with high school, my father became a highly successful business executive and president of a national company. He was a popular keynote speaker at conferences and seminars. His advice was sought by smart people who aspired to higher performance.

Yes, Dad was exceptionally bright. But his success was based less on his intelligence quotient than on his imagination quotient.

He told himself stories that motivated and empowered him to chase down his dreams.

I recall his telling me that success in any venue depends a great deal on how we see ourselves.

In 1954, that’s what happened with Roger Bannister, the British medical student who became the first human to run a mile in less than four minutes. Throughout the history of track and field, athletes assumed the “four-minute barrier” would never be broken. In fact, many so-called experts said the barrier couldn’t be broken because the human body could literally not withstand the required exertion. But because Roger Bannister rejected the conventional wisdom and because he projected a new movie on his internal motion picture screen, he believed he would break the barrier. And he did.

Here’s the real a-ha: Bannister’s new record lasted only 46 days. And in subsequent years many hundreds of athletes have run a mile in less than four minutes.

Did the human species somehow advance virtually overnight? No. Athletes changed their internal stories. Like “the Little Engine That Could” folktale, they told themselves “I think I can, I think I can.” And they did.

That marvelous gift of managing human potential is highlighted in Kendra Hall’s book Choose Your Story, Change Your Life: Silence Your Inner Critic and Rewrite Your Life from the Inside Out.

The Chief Storytelling Officer at SUCCESS Magazine, Kindra focuses her research on the power of storytelling and how using stories—both professionally and personally—can yield significant positive results.

Rodger Dean Duncan: Many people tell themselves self-limiting stories. Why do they so often seem unaware of their ability to change their stories and, therefore, change the course of their lives? 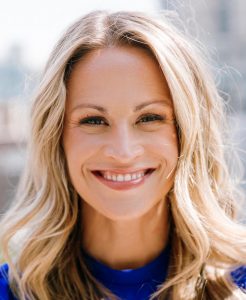 Kindra Hall: The reason we’re so unaware of our ability to change these stories starts with the fact that most people don’t even realize they’re telling themselves self-limiting stories. Over thousands of years, humans have evolved to have an inner storyteller, and that storyteller has one job: to keep us safe. Because of this singular motive, risks that could actually provide positive outcomes (like asking for a promotion or putting ourselves out there to progress a relationship) are interpreted as life-threatening.

Our inner storytellers respond to these perceived threats by signaling alarm bells and paralyzing us by retelling stories of our failures and exploiting our greatest fears. Because this process is so automated and deeply ingrained in our subconscious, it can be difficult to recognize and even more challenging to change.

Duncan: Self-stories can either hold a person hostage (to a less-than-satisfactory existence) or liberate the person to pursue a more fulfilling life. What’s the key to telling one’s self a liberating story and living that story with conviction and confidence?

Hall: The key is choice—to understand that we have the power to choose our stories. We can’t rewrite the past, but storytelling can change the way we feel about it. We can’t escape our fears; but by choosing better stories, we can control how we react to them.

Duncan: Regardless of sincere ambition, an out-of-shape middle-aged couch potato cannot fulfill his dream of playing in the NBA. So, what kind of reality check can people apply to their stories?

Hall: The ultimate reality check is built into this process, because it utilizes stories that have actually happened in your life rather than stories of what could be. The stories of things that we have already accomplished or challenges that we’ve overcome are much more powerful because they can silence our inner critics. It’s impossible argue that we can’t do something when our past behaviors prove that we are totally capable.

This process also allows us to reframe our mindset. Maybe that couch potato won’t ever play in the NBA, but perhaps there’s a desire to become more physically fit. Capitalizing on the stories of times when they overcame challenges could help people achieve. While repeating, “I’ll never play in the NBA” will just keep the potato stuck on the couch and in the same self-limiting loop, repeating other stories that motivate movement will help get the shoes on and the body moving. 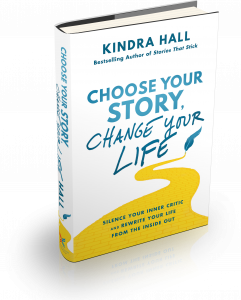 Duncan: You point out that it isn’t behaviors that hold people back, it’s the hidden stories they tell themselves before the behaviors. Give us a couple of examples.

Hall: When a certain event happens, we subconsciously begin telling ourselves a story relating to it. This happens so quickly—in between the event’s occurrence and our response to it—that we often don’t realize its influence. For example, say I set my alarm for 5 a.m. with the intention of exercising before work. When the alarm goes off, a story will play in my subconscious. If that story is one of how great I felt after going to the gym yesterday, I’ll be more likely to get out of bed and exercise. If, instead, I tell myself the story that one workout won’t make a difference or that I will work out later in the day (which never happens), it will be much easier for me to hit the snooze button.

Another example is a man who wanted to submit a proposal for a professional opportunity. But he never finished it and missed the deadline. Why? After asking himself that question, he realized there are many stories from his childhood when he was encouraged and rewarded for “perfect” scores. These stories keep him from submitting projects and proposals unless they were “perfect.” This resulted in many missed opportunities.

Duncan: What’s your advice for breaking a bad self-story habit?

Hall: The first step is to catch the bad stories in the act. We must actively identify the stories that are keeping us stuck. After we find these stories, we must analyze them. Beneath the surface, each story holds limiting beliefs about ourselves, and it’s important that we understand what those beliefs are and why we hold them. Third, we need to choose new stories—stories of love and kindness, courage and perseverance—the positive stories of our lives. These are the kinds of stories that serve us, and despite our negative biases, they far outnumber the bad stories that we have on a loop.

Finally, we have to install these new stories into our subconscious. At first, this will require very intentionally telling our chosen stories in tense moments (some go so far as to schedule time to review them on their calendars!). Gradually, these stories will become just as automated as the negative ones—and that’s when your life will truly change.

Duncan: Using the Titanic tragedy as a metaphor, you talk about “iceberg moments.” Exactly what are those moments, and what’s the best way to deal with them?

Hall: What sank the Titanic wasn’t the piece of the iceberg that was protruding above the surface of the water, but rather the giant mass that was lurking below. The same is true for our stories. Stored in our subconscious is a giant mass of stories and experiences that have been collected over the course of our lives.

Like the iceberg that sank the Titanic, this mass of stories can cause huge devastation in our lives. These stories show up in moments of vulnerability—when we consider asking for a promotion, receive a social invitation, or have the chance to speak up in a meeting. These “iceberg moments,” when we tell ourselves the stories that reinforce our limiting beliefs, are opportunities to reveal the larger forces at work.

By using these opportunities to look inward and catch the bad stories in action, we can gain invaluable perspectives on the stories that make up our lives. As we pull these stories out from beneath the surface, we can unveil patterns and themes that will reveal the stories—and, subsequently, the limiting beliefs—that we need to change.

Latest posts by Rodger Dean Duncan (see all)
Posted in Blog, The Duncan Report and tagged Motivation, Perception, Story
← How to Boost Team Effectiveness in An Age of Shifting ValuesHow to Assess the Opportunity Cost of Saying ‘Yes’ →