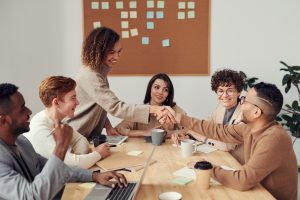 That simple statement underscores what’s needed in a world where many people feel overmanaged and underled.

Stephen M.R. Covey has devoted his career to helping people make the very most of their work, their relationships, and their very lives. In recent years, his focus has been on issues related to trust. You’ll likely recall his first bestselling book The Speed of Trust. His latest offering is TRUST & INSPIRE: How Truly Great Leaders Unleash Greatness in Others.

In the first part of this conversation, Stephen explored the key stewardships of effective leaders and explained how to manage stewardship agreements. This time, he focuses on changes in today’s workplace and workforce and draws clear distinctions between Trust & Inspire and Command & Control leadership.

Duncan: In what ways has the global pandemic increased people’s appetite—and need—for a Trust & Inspire approach to leadership?

Covey: It’s greatly accelerated. In reality, we were already headed this way. I was four years into writing this book before the pandemic hit.

Change is happening at a much faster pace today. Some suggest we’ve experienced the equivalent of ten years of change in the last two years. The nature of the world has changed through technological innovation, including disruptive technologies.

The nature of work has changed. It’s far more collaborative, innovative and creative than ever before. It’s more interdependent.

The nature of the workforce has changed. There’s greater diversity than ever before and as many as five generations at work today, who often have vastly different expectations of their work, of their leaders, and of what they really want. This inherently changes not only the way the workforce operates, but also our society and families.

Finally, the very nature of choice has changed. As technology has developed and helped us to respond to all of these other changes, we’ve moved from a world of multiple choice, where people tended to have a more limited number of options, to a world of infinite choice to live anywhere, work anywhere.

Duncan: You champion the idea that trust is a competency—an actual skill that can be cultivated and improved. Why is that paradigm so challenging for some people to grasp?

Covey: People are deeply scripted around trust. Many tend to feel “you either have it or you don’t.” But in the same way we could lose trust through our behavior, we can also consciously, deliberately create trust through our behavior. We can build it on purpose. We often experience trust from the outside in, and for that reason we like to blame our trust problems on everyone else. But if you want to grow trust, to really strengthen it, and even to restore it, that’s an inside-out process. The idea that trust is a competency is really empowering, and when people get that they start to see things very differently.

Duncan: How do you respond to someone who says Trust & Inspire is okay for much of the time, but in some circumstances Command & Control is the only approach that can work? 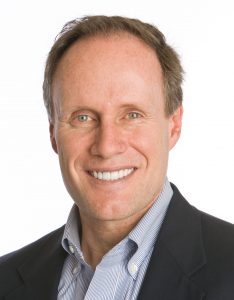 Covey: This is a great question, and there are really two key things here. First, are we talking about working with people, or with things? Great leaders are strong in both management and leadership. You manage things, and you lead people.

Command & Control is well-suited to managing things, but too often becomes the prevailing paradigm for managing people in the same way. People aren’t things, and don’t respond well to being “managed.” Use yourself as exhibit A.

Remember that with people, fast is slow, and slow is fast. When Command & Control leaders attempt to be efficient with things and people, guess what happens in a world where 41% of the workforce is considering leaving their current job? They end up with no people and a lot of things! That’s the “great resignation” we hear so much about. People are whole people, and no one wants to be reduced to a fungible commodity, a function, or a job.

Duncan: What are a couple of the most common reasons people give for resisting adoption of Trust & Inspire leadership, and how do you calm their concerns?

Covey: I’ll give you three insights on this.

For example, I’m consulting with a leader right now whose predecessor was Command & Control. This is a great person and performer who cares deeply about those he leads. But he feels so strongly about not being Command & Control that he’s also not leading. To avoid micromanaging, or being too “hands-on,” he’s become too “hands-off.” It’s not enough. Being a “hands-off” kind of leader may not be stifling or controlling, but it’s not empowering either—and it’s certainly not inspiring.

Second, there are some common barriers that people may encounter when they really start to commit to becoming this kind of leader. While adopting this new style of leadership carries enormous potential, it can still feel like a leap. Some may feel like, “This is great, but it won’t work here—not on my team, or in my organization, or in my industry.” Others may fear, “But what if I lose control?” or “But what if it doesn’t work?” Some of us may have been burned in the past, or may struggle with imposter syndrome. For a lot of us, it’s really hard to let go, or the barrier may simply be, “This is my style, this is who I am.”

There’s truth and validity in all these barriers. But they also constrain potential and limit performance. The good news is that regardless of our circumstances, leadership is a choice. Enduring influence is created from the inside-out. So, no matter what is happening around me, my job as a leader is to go first.

April Wensel, who describes herself as a “recovering jerk programmer,” was neck-deep in a cut-throat “old values” tech industry that was heavily scripted in competition, elitism, ego, and being “the Rockstar.” And she was actually thriving in that environment … until she wasn’t. The wall she hit was a hard one. So, she rescripted, and became a Trust & Inspire leader, first for herself, then for others. She’s a great example of the fact that we are programmers, not programs. It doesn’t matter what kind of program we’re in, or the programming we’ve been given. We can choose to lead out first. Today, April is running a successful and impactful organization called Compassionate Coding, and she’s tapped into a sense of purpose, meaning, and contribution.

The third insight, and where maybe a sense of calm really comes in, is that nobody is perfect. Trust & Inspire leaders aren’t either. I remember traveling with my father for speaking engagements, and occasionally someone would ask him, “Dr. Covey, do you live the 7 Habits?” And he’d respond, “Oh, probably about 80% of the time. But I’m always trying.” 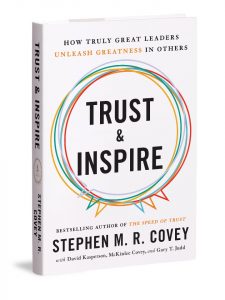 Duncan: There’s a lot of talk these days about “vulnerability.” How do you define that, and what role does it play in a leader’s effectiveness?

Covey: Vulnerability to me means a kind of intimacy. I break down that word “intimacy” to say “into-me-see.” People can experience me not just as authentic, but also as open. The very act of being vulnerable invites others to be the same, to open up. It builds trust, and it inspires.

I love the story of Brad Smith, former CEO of Intuit. He told his board he wanted to do a 360 to get real feedback about himself and his leadership. While 360s can expose strengths, their real value is in exposing weaknesses so we can work on them. But most people would want those weaknesses kept private. Brad not only shared the 360 results with his board, he posted them on the door outside his office for everyone to see. This showed the company what he was working on and it invited his people to help him be accountable to his own improvement. You can bet that people’s trust in him rose and they were inspired to similarly want to improve.

Duncan: What question do you wish I had asked, but didn’t … and how would you respond?

Covey: Maybe it’s more of a challenge I run into than a question, but it’s around inspiration. And interestingly, it’s very similar to the challenge I started to get nearly twenty years ago when I really started writing and speaking on trust—and you know this, Rodger, because you were there with me! It’s that people saw trust as this kind of soft, “nice to have” social virtue. Nobody argued with it being a good thing, but it wasn’t seen as the performance multiplier it’s known to be today.

I think inspiration is somewhat the same kind of thing. Nobody sees it as a bad thing, but for many it’s also not seen as vital, or as learnable. But let me say this: our world today is dangerously low on inspiration. People need it.

The word “inspire” comes from the Latin word “inspirare,” which means “to breathe life into.” The opposite of that would be to suck life out of. Rodger, the acceptability of the idea that work can “suck the life out of us” in exchange for a paycheck has been the status quo for decades. It’s no wonder that the last couple of years have made it blatantly apparent that people are done with this kind of transactional thinking.

People want to do work that matters, that inspires them. And they want to do it with people to whom they matter. Leaders and organizations who can inspire, who can breathe life into those they lead will win in the workplace, and by extension, will win in the marketplace. Inspiring others, like trust, is a learnable skill. This is where the world is going. Inspiring others is every leader’s job—so we’ve got to get good at it!

This interview was first published by Forbes.com, where Dr. Duncan is a regular contributor.