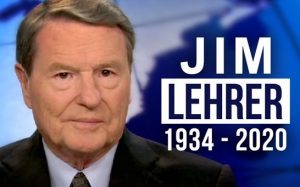 Occasionally we run across someone whose example helps guide us for the rest of our lives.

For me, one such person was Jim Lehrer.

To millions of people, Jim was the face of the PBS NewsHour where he was anchor for more than three decades. Others will remember him as the moderator of a dozen presidential debates, an experience he once described as “walking down the blade of a knife.”

The less public Jim is the one I remember. More than 50 years ago he was city editor of the Dallas Times Herald. He hired me away from another newspaper to help cover the 1968 presidential campaign and the race for the Texas governorship. I quickly learned that this young Jim Lehrer was whip-smart, wise beyond his years, and funny.

Yes, funny. In his spare time, Jim had written a novel he called “Viva Max.” It was about a present-day Mexican general who decided he wanted to take the Alamo back. Jim’s story was made into a Hollywood movie starring Peter Ustinov and Jonathan Winters. The fact that Jonathan Winters played a lead role tells you all you need to know about Jim’s humor. He would later write nearly two dozen more novels, some plays, and a couple of memoirs. 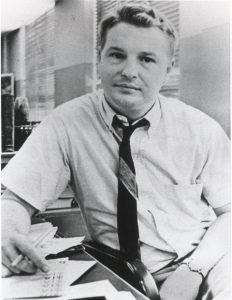 Jim was a tenacious reporter, a meticulous editor, and a wonderfully insightful mentor.

One day in the newsroom he gave me a brief—and memorable—lesson on interviewing. He urged me to ask a good question, listen attentively to the answer, and then count silently to five before asking another question. I argued that five seconds would seem like an eternity to wait after someone responds to a question. Then it occurred to me: Of course it would seem like an eternity, because our natural tendency is to fill a void with sound, usually the sound of our own voice.

Jim taught me that by resisting the temptation to respond too quickly to an answer, I could discover something almost magical. The other person would either elaborate on what he’d already said or he would go in an altogether different direction. Either way, the respondent would be expanding his answer and I would get a clearer view into his head and heart.

That wise and simple coaching on how to listen has served me for decades as a writer, teacher, consultant, coach, church worker, husband, father, and friend.

In today’s highly polarized, respect-deficient climate, Jim Lehrer’s sense of decency would be a welcome tonic. One time on the air he shared some of his reporting philosophy:

Those points should be taped to the teleprompter and computer screen of every media person practicing today. Or at the very least, maybe “reporters” should count silently to five before firing off another salvo of opinion.

Posted in Blog, The Duncan Report and tagged Coaching, Communication, Listening, Mentoring
← Do Distractions Wreck Your Day? Here’s a Smart FixYour Assumptions About ‘Motivation’ Could Be Wrong →