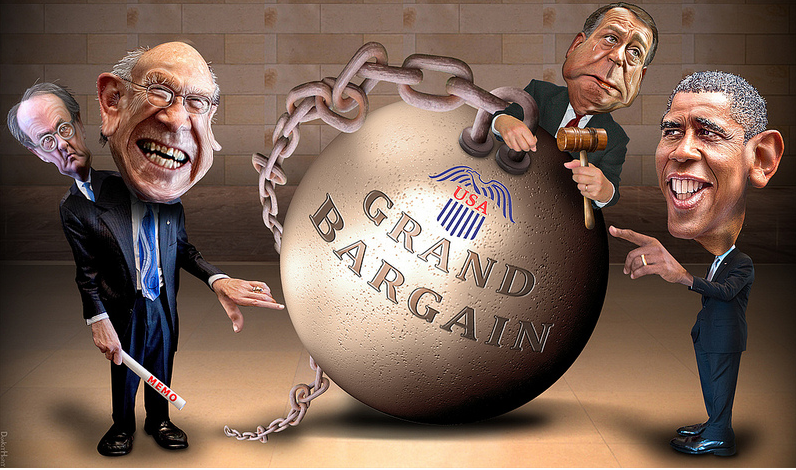 The fiscal cliff that everyone’s talking about is one of those multi-purpose metaphors. It’s not just about spending, taxes, entitlements, and other pressing economic issues. It also describes the consequences of the combative behavior found in today’s politics, business, media, sports, academe, military, and even religion.

Ours is a debate society. Radio and television “talk shows” are little more than gladiators with microphones. Apparently loud and obnoxious combine for good ratings.

We vote for political candidates with the hope they will actually work together for the general good, not just with an eye on the next election. But then, long after the votes are in, they continue to campaign and posture ad infinitum. It’s as though nothing is worth saying without benefit of cameras and klieg lights.

Behavior in corporate meeting rooms is often not much better – the same old patterns of competition, one-upmanship, I’m-right-and-you’re-wrong power plays that smother any hope of real collaboration. Oh, I know, civility and even collegial warmth are the superficial norms in many organizational cultures, but the unwritten rules lurking beneath the surface are often more about turf protection and going to the jugular than about honestly seeking the best ideas.

If we’re serious about engaging each other in problem solving, we must revive the lost art of authentic conversation. We must concede that, even when we disagree, each person’s perspective adds to the whole and has the potential to move us closer to a fresh alternative that’s better than anybody’s locked in talking points. Dialogue does not consist of two competing monologues. Genuine dialogue involves the free flow of clear meaning toward a shared purpose in an atmosphere of mutual respect. Grandstanding smothers shared purpose and strangles mutual respect.

A number of thinking and communication errors can send us over a cliff in our relationships, regardless of our venue. Here are three, along with corrective actions.

Allness. This is a dogmatic, unqualified, categorical attitude that we know all there is to know about something. Have you ever met a guy who’s a nut on sports statistics? He knows everything that’s knowable about ice-age batting averages and ancient football scores. If you don’t believe it, just ask him. And if you’re looking for an argument, try contradicting him. He’s never wrong. There’s something about the tone of finality and absoluteness of some people that’s irritating to the point of pain. When they speak it’s almost as though they’re telling you, “What I’m saying is all there is to know about this subject. There’s nothing more.” And this absoluteness is hardly confined to the characters on C-SPAN. Right now in thousands of barber shops and beauty salons the intricate problems of politics, disease, war, economics, climate change, and who’s the top talent on American Idol are being neatly and conclusively solved.

Corrective Action: If you have an intolerance of other viewpoints, you won’t be very popular in many places and you certainly can’t be successful with dialogue. Be wary of building up an “all wall” that separates you from the reality of what you actually know. Look out for those moments when you risk being viewed as too self-assured, just too certain. Self-confidence is wonderful, but make sure you don’t lead with it or you’ll smother dialogue and be offensive to boot. Practice saying four simple words: “I didn’t know that.” It’s amazing how a generous, self-administered dose of genuine humility can cure a conversation – or a relationship – of hostility. Apply the humility early and often.

Inference-Observation Confusion is a pattern of communication mix-up that’s had us all in hot water at one time or another. This occurs when you infer more than you’ve actually seen or heard about a situation. Suppose you arrive at work one morning and see standing alone in your manager’s office a woman you don’t recognize. Answer the following questions by saying “true,” “false,” or “don’t know”:

(b)  A woman you don’t recognize is standing alone in your manager’s office.

(c)  The woman is your manager’s sister, visiting from out of town.

(d)  There is no one in your manager’s office.

(e)  The woman standing in your manager’s office is from the finance department and she’s conducting a surprise audit.

If you think item (b) is true, item (d) is false, and you don’t know about the others, you get the idea about distinguishing statements based on inferences. But if you think items (a), (c), and (e) are true, consider other possibilities. Suppose the woman is a job applicant who’s arrived early for an interview. Suppose the woman is a homeless lady who’s sneaked into the building and has decided to camp out in your manager’s office. The possibilities beyond what you actually observe are endless. Clearly, items (a), (c), and (e) are based on inferences. You cannot say with a high degree of confidence whether they are true or false.

Corrective Action: Be mindfully aware when you’re inferring as opposed to observing, then calculate the degree of probability that your inferences are correct. Lever Brothers mailed out more than 50 million samples of its new Sunlight dishwashing detergent. Despite the fact that the label stated “Caution: Harmful If Swallowed,” more than 1,000 consumers used the product on salads and in drinks. They incorrectly inferred from the product’s scent, the picture of lemons on the label, and the word “real lemon juice” that it was a food product.  “Read the label carefully” is good advice for our communication as well as for our use of consumer products. The lesson? Don’t jump to conclusions. Beware of inferring too much from what you actually observe.

Bypassing is a communication misstep that many of us make more or less intentionally. We are bypassing when we listen selectively. For instance, a man’s wife may tell him she has tickets to the symphony the following Thursday night. When Thursday rolls around, however, the husband has scheduled a bowling date which he then claims simply can’t be broken. Since attending the symphony is not his idea of a fun evening, he didn’t really hear his wife tell him about the tickets. Oh, he heard her talking. But because of the subject matter he subconsciously tuned her out and the message was never fully received. Youngsters often fall into the same habit (“Oh, I didn’t hear you tell me that, Mom!”).

Bypassing also occurs when we attribute different meanings to the same word. Remember: meanings reside in people, not in messages or individual words. In my Oklahoma youth the word “puny” was used to denote sickly or weak, as in “The runt in that litter of pigs looks kind of puny.” When I later worked on Wall Street I heard my Eastern-born colleagues use the same word to denote unimportant or unnecessary, as in “That fourth document is puny, so let’s kill it.” Although one might argue that these uses of the word are directionally similar, the differences are certainly ripe for confusion.

Corrective Action: Old-fashioned specificity is the best remedy for bypassing. If you aren’t sure what someone means when he’s talking to you, simply ask for clarification. Paraphrasing the other person’s words can also help: “When you say you’d like the report by the end of the month, is the 31st okay or do you expect it sooner?” Another way to avoid bypassing is to ask open-ended questions that invite further dialogue: “What have I said that we should talk about more?” “Which points could use more clarity?” “How can we set this up so we both understand each other?” Asked sincerely and with an encouraging tone, such open-ended questions are very important. Close-ended questions such as “Do you understand?” or “Are there any questions?” may be met with silence, especially in a group setting. People sometimes won’t admit their confusion or misunderstanding because they don’t want to appear dense or incompetent.

All this may seem to have a fairly high “oh, duh” factor. Don’t be a know-it-all, don’t jump to conclusions, and don’t play dumb may feel self-evident. But for many people, apparently not. The problem, as Will Rogers reminded us, is that common sense “ain’t all that common.”

A quarter century ago Robert Fulghum’s book All I Ever Need to Know I Learned in Kindergarten was wildly popular. Fulghum wrote that the most valuable lessons he’d gleaned from life didn’t come from the graduate school mountain, but from the kindergarten sand pile. Here’s some of what he learned:

It doesn’t require much extrapolation to see how such rules for living apply to Washington’s dysfunctional gladiator culture. Or to the meeting rooms of your business. Or to your own kitchen table. How common is common sense in your world? Be careful not to fall off your own cliff.

(This article by Dr. Duncan originally appeared in Forbes magazine)