Our friend Jeri finally found a house that suited her needs. It was in a quiet, friendly neighborhood with lots of trees and little traffic.

One thing Jeri liked most about this house was the front entry, a large door surrounded by nine small windows. Trouble was, the previous owner—apparently for the sake of privacy—had glued plastic beads, the kind you’d buy at a craft store, to the inside glass of all nine of the windows. 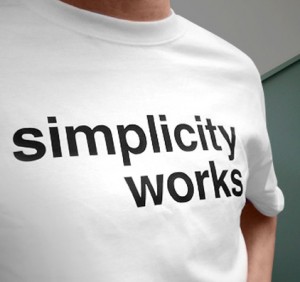 Removing the plastic beads was to be the first of Jeri’s refurbishing projects. But it turned out to be more challenging that she anticipated. She tried chipping. She tried prying. She tried harsh chemicals. She even tried Goof Off, a product that some consumers refer to as a chain-saw-in-a-can. No luck. So she tried a hot air gun, hoping to “relax” the glue enough to make it easier to pry off the beads. Still no luck.

Sometimes we make jobs more difficult than they need to be. Simplicity can be the key to breakthroughs

If you’re looking for more simplicity in your life, here are four ideas to consider.

Mind map your plans. A mind map is a diagram that visually outlines information. It’s often created around a single word, then associated ideas, words, and concepts are added. For example, let’s say you’re planning a meeting. The center word would be “Meeting” and the associated boxes might be things like Agenda, Invitations, Logistics, Materials, Follow Up, and related topics. If you’re using a software program to do this (I prefer a program called Mindjet MindManager), it can easily be manipulated to map ideas ranging from very simple to very detailed. Before I wrote my most recent book, I created a mind map of the entire table of contents plus the key points of each chapter. The mind map not only helped me ensure that the manuscript elements had the appropriate connective tissue, it kept me on track with the project.

Put your to-do list on steroids. Because good planning and execution are important keys to simplicity (as well as to productivity), a good to-do list is absolutely essential. But not just any to-do list. To facilitate both efficiency and effectiveness, your to-do list should be broken out into categories like Family, Business, Travel, Household, Finances, Community, etc. And because situations and time opportunities change, your list should be easy to recalibrate. If you use a smartphone or other electronic device (which I strongly suggest), there are dozens of applications that can help with this. I’ve tried several apps, and my favorite is Wunderlist. It works on my smartphone, my tablet, and my computers, quickly syncing all my information so I’m always on top of my tasks. And the free version does most anything you can imagine to simplify your to-do lists.

Use the right technology. As you can tell by now, I’m a fan of technology. And I reject the idea that technology complicates our lives. Technology can be complicated, but not if we’re careful about selecting and using it. In a nod to Steve Jobs, I use an iPhone, an iPad, a MacBook Pro laptop, and an iMac desktop. All my programs and documents sync between devices. That’s simplicity. I can read a book on the iPad, then pick up my iPhone and start reading exactly where I left off on the tablet. That’s simplicity. I can start writing an article on my iPad (it’s perfect for an airplane’s drop-down tray table), then finish it later on my laptop. If you’re concerned about battery power, pick up an external battery. My preference is the Anker Pro. It’s roughly the size of a ¾ inch thick 3×5 card and packs enough power to charge a smartphone seven times or a tablet at least twice. Very handy for travelers, and much simpler than always looking for an electrical outlet. 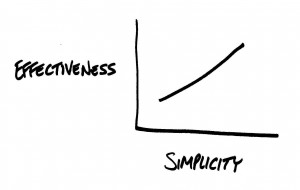 Stop before you’re finished. That may sound counterintuitive, but in many situations it’s an excellent rule to adopt. It comes from Ernest Hemingway, known for being especially productive in his writing sessions. In a 1958 interview with the Paris Review Hemingway offered this advice: “You write until you come to a place where you still have your juice and know what will happen next and you stop and try to live through until the next day when you hit it again.” In my own early career as a magazine writer, I sometimes faced the dreaded writer’s block, a kind of stupor that seemed to slam the door on any productive thinking. Then I tried Hemingway’s approach. At the end of a writing session I stopped right in the middle of a paragraph or right in the middle of an example or illustration or key point. And I made sure that I had at least a rough outline of what was to follow that point. Then, the next time I sat down to write, the pump was already primed. I simply picked up where I’d left off. Once I fleshed out the point I was warmed up and able to proceed. The same practice can help with most any kind of project that requires more than a single session to complete.

Leonardo da Vinci, genius of the Renaissance, perhaps said it best: “Simplicity is the ultimate sophistication.”

There’s a lot to be learned from simplicity. Don’t overcomplicate it.

(Note: This article by Dr. Duncan was first published by Forbes magazine where he is a columnist)

Latest posts by Rodger Dean Duncan (see all)
Posted in The Duncan Report and tagged Execution, Productivity, Simplicity, Work
← A CNN Pro’s Tips for a Great InterviewWas Your Favorite Book Written by a Ghost? →
Scroll To Top