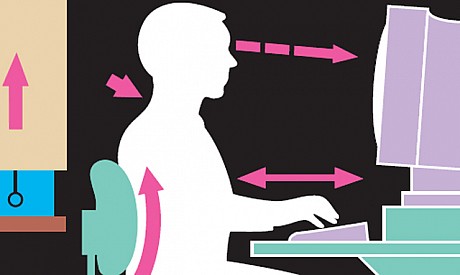 My friend Steve and I have been seeing too much of each other. He’s a very nice guy, I always enjoy our conversation, and he helps me in ways that nobody else can. But I’d still like to see less of him.

Steve is my chiropractor.

I’ve been seeing Steve for help with an old back injury. I also do stretches and basic exercises. I walk 10,000 to 15,000 steps every day, at least half at aerobic speed.

But I’ve learned that one of the smartest things I can do is simply stand up.

Like many people, I spend a lot of time in various meetings and in front of a computer screen. All of it in a sitting position. Bad idea. So two years ago I had a cabinet maker build me a custom stand-up desk. It’s the most useful piece of “equipment” I’ve ever owned. When I use it regularly I notice a definite improvement in everything from back comfort to general vitality. Stand-up desks seem to be all the craze. But I wondered: is this just a passing fad, or is the movement backed up (no pun intended) by solid science? So I interviewed Jon Paulsen. He’s a mechanical engineer and a certified professional ergonomist. That’s the science of work and people’s relationship to it. Based in Austin, Texas, he’s founder and president of the Human Solution, a company focused on design and products that improve work performance.

Rodger Dean Duncan: You’re obviously a proponent of sit-stand office arrangements because you created the UPLIFT Desk. What are the research findings on the benefits of this kind of furniture?

Jon Paulsen: When it comes to the benefits of using a sit-stand desk, the science is in. Dozens of peer-reviewed studies demonstrate the significant health benefits of changing positions, and the positive effect that movement (blood flow, etc.) has on our overall physical comfort and health. For example, a 2011 study by the Centers for Disease Control noted a 54 percent decrease in musculoskeletal pain among workers who alternated from sitting to standing throughout the day. Similarly, a 2014 study by the University of Cincinnati reported significant decreases in shoulder and back pain when participants varied their postures. Even more important, periodic standing reduces the risk of a host of problems including obesity, heart disease, diabetes, metabolic disorder, and even some cancers. When we sit too long, everything in our bodies slows down. It’s harder to clear fats from blood, to process insulin, to keep muscles active and spines flexible, leading to soreness and possible organ damage. Even our mental functions slow because we’re not moving enough to pump much blood to the brain.
Page break

Duncan: So simply standing up is a helpful form of exercise?

Paulsen: Absolutely. Periodic standing allows for movement that alleviates all these problems and helps prevent the diseases associated with them. In fact, according to a 2013 study by the University of Leicester, reducing overall sedentary time is more important than incorporating vigorous exercise in preventing diabetes. This finding was repeated in a 2007 University of Missouri study, which also included obesity, metabolic syndrome, and heart disease among the diseases that can be improved and prevented with regular, small movement throughout the day. You are better off moving throughout the day than you are going to the gym for one big workout.

Duncan: It seems like common sense to change position occasionally and move around. What’s the benefit of that related to vigor, fatigue, tension and related things associated with productivity?

Paulsen: You’re right, a lot of this does seem like common sense, and most people’s daily work routines probably already bear this out. When your back is sore, you move to a new position. When you’re tired, you get up and walk around the office. When you’re stiff from sitting, you stand up and stretch. When you’re trying to come up with an idea or solve a problem, you move around. A sit-stand desk just makes it easier, faster, and more convenient. It also increases your productivity because you’re still at your desk as you move up and down. There’s research to back this up as well. A Washington University study shows that standing while working improves collaboration and encourages creativity. And a 2004 Cornell study reported that 82 percent of participants indicated a preference for height-adjustable desks over fixed work surfaces, finding that they decreased pain and increased productivity. It may seem counterintuitive, but standing while you work and incorporating subtle movement increases your energy, since it improves blood flow and brain activity. Top companies like Google, Facebook, and Exxon give standing desks to their employees, not just because they’re concerned about their workers’ health, but because they also know they foster improved performance.

Duncan: People have had backaches and other ailments since the beginning of time. Why is the focus on ergonomics such a relatively recent phenomenon?

Paulsen: Employees used to be treated as somewhat disposable if they were injured. There was little regard for safety, much less ergonomics. Thankfully, we’ve come a long way since that time. We also understand now that ergonomics is a true science. In a sedentary office environment, constant computer, tablet and phone use is dangerous to health. Our bodies are just not built to endure these postures and this lack of movement for hours on end. Now that we better understand the science behind how our bodies work, we’ve been able to come up with practical and easy ways to stay healthy and prevent disease, like simply alternating standing and sitting at work throughout the day. And the technology has advanced far enough that we can build standing desks that are reliable, easy to use, and affordable.

Latest posts by Rodger Dean Duncan (see all)
0Shares
0 0 0
Posted in Blog, The Duncan Report and tagged Health, Productivity, Stand-up desk
← Leadership: Create Your Own Mount RushmoreSick of Your Job? Here’s How to Take Control →
Scroll To Top