Nearly everyone talks about teamwork, perhaps because the word conjures up feel-good images of cooperation and locked arms. But honestly, “teamwork” rarely seems to produce Kumbaya moments. In fact, getting the most out of a team is often as hard as pushing water uphill with a rake: lots of activity, but only marginal results.

The good news it that it doesn’t have to be that way, especially if you follow the counsel of team effectiveness expert Liane Davey. With a Ph.D. in Industrial and Organizational Psychology (University of Waterloo), Liane is highly sought by key executives at some of North America’s leading financial services, consumer good, high tech, and healthcare organizations. Which goes to prove: teamwork issues are universal.

Regardless of your business, my bet is that you can get a boatload of valuable take-aways from this interview with Liane.

In many organizations, “teamwork” seems to be more common as a buzzword than as an actual practice. What’s the key to making genuine teamwork a reality?

It sure is. Every time I see one of those trite teamwork posters with the rowers hanging on the wall, I want to rip it down. Teamwork is hard work, and it takes a lot more than nice posters on the wall.

The first thing that’s usually missing is a clear mandate for each team. Each and every team should be able to articulate why they are a team and to describe the unique value they add together. This mandate should focus on the things they can only do together. It should strip away individual work and accountabilities and focus solely on team outputs.

Just creating clarity around why the individuals need to work together and what they need to accomplish goes a long way. Once the mandate of the team is spelled out, most teams have a rude awakening about how much time they’ve been wasting just going around the table giving updates. So then there’s work to do to remove individual work from the team table to make room for the added value discussions, debates, and decisions that haven’t been happening.

Once the team is clear on its purpose, there are many skills and deliberate practices the team needs to adopt to make sure they create a whole that’s greater than the sum of the parts.  Common issues are poor listening, drowning out minority perspectives, diluting energy with too many priorities, and shying away from conflict. All of those can be fixed in a team that’s motivated.

What are some of the warning signs that “teamwork” is little more than a hopeful slogan in an organization?

In my book You First: Inspire Your Team to Grow Up, Get Along, and Get Stuff Done, I talk about five different categories of toxic teams and the warning signs that your team might be getting into trouble. You’d be surprised how varied the issues are. Let me give you a quick idea of each of them.

Crisis Junkies: If your team has started to use crises as the way of forcing alignment and silencing different perspectives, that’s a problem. Although we often see these teams at award ceremonies receiving adoration and praise for pulling something out of the fire, it’s time to recognize that they are the ones who ignored the smoke in the first place.

Spectators: You might not think of this team as toxic, but groups that are just a collection of relationships with the boss aren’t teams at all.  When everyone just shows up, reports in, and tunes out, they miss the chance to get anything more from the team than they would have got from the individuals working in isolation.

Bobble Heads: Bobble heads are even scarier than Spectator teams because they introduce the risky behavior and bad decision making that’s associated with groupthink.  Whether it’s an overly controlling boss or just too many team members who think too much alike, if no one ever rocks the boat, you should be very worried. But you might look at a Bobble Head team and hold them up as the paragon of virtue (“look, just like the happy people on the poster!”)

Bleeding Backs: Sure, these teams look great when you peer in through the window because everyone is nodding—but wait until you talk to team members behind closed doors. Passive-aggressive gossip and back channel decision making mean no decision ever sticks and no plan gets implemented.

Royal Rumble:  I probably don’t even need to mention the Royal Rumble team to you, Rodger, because this no holds barred, nasty, fight to the death kind of team is easy to spot from a mile away.  But if you start to realize that everyone on the team is doing a lot more yelling than listening (more transmitting than receiving), you know you have a problem.

So the warning signs that you don’t have real teamwork come in obvious and less obvious forms.  In the case of the Bobble Heads (“wow, aren’t they so happy!”) and the Crisis Junkies (“they saved the day!”) we even hold these teams up as role model. That’s scary. 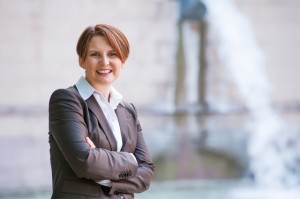 What are some best practices for replacing a silo mentality with a spirit of collaboration?

First, do the work of defining the things that the team can only do together. Once people see the mission critical mandate of the team and their role in achieving it, the silo is pretty clearly insufficient. Making people realize they need the team isn’t too difficult.

The harder part is getting people to change their mindset. In You First, I talk about the ugly, biased assumptions we make about people’s intent. This baggage prevents us from being open to collaboration. I share a simple approach to help you short circuit those negative assumptions and to replace them with the kind of curiosity that promotes effective communication and collaboration.

Some leaders claim that “too much” teamwork merely slows down decision making. Do you agree?

Yes! Too much teamwork, just like too much collaboration, can be over-doing it. There are plenty of tasks that we do more effectively and efficiently as individuals than as teams. That’s why I put so much attention on defining the very small set of things the group can accomplish only as a team. Then we don’t have to put all the energy into staying open minded, communicating effectively, listening intently, for every task; because those things take huge amounts of energy. So first, only use teamwork only where it’s fit for purpose

A lot of people seem to do back flips to avoid conflict. What role do you think conflict plays in practicing effective teamwork?

Productive conflict—the uncomfortable friction between differing points of view—is absolutely essential to effective teamwork. I’m much more likely to help a team increase the amount of conflict they are having than to decrease it. Really vigorously wrestling with different perspectives, contradictory data, paradoxical realities—that’s the sweet spot for teams. If the issue doesn’t require that, it’s probably better resolved by an individual.

Now, conflict doesn’t mean screaming and vicious, personal attacks. I spend a lot of time teaching people how to have productive conflict. That requires focusing on what I call the “two truths,” which asks people to add their reality to the reality of others instead of trying to trump someone’s ideas. I also recommend asking about hypotheticals or playing out scenarios to help the person see your perspective. There are lots of ways for nice people to have conflict. The most important thing is to try disagreeing and to see that it’s not so bad: you probably don’t get your head ripped off; you probably don’t get fired. But there is a mythology built up in organizations that says disagreeing or challenging isn’t acceptable. It’s usually groundless, but the fear endures.

Because honest self evaluation can be so helpful, what are the three or four top questions you encourage leaders to ask themselves regarding teamwork?

Rodger, I’m going to cheat and give you five sets of questions.

(1) Start with a Positive Assumption: What are the assumptions you’re making about people? How do those detract from your ability to hear them and get value from them?

(2) Add your Full Value: What is your unique contribution to the team? How do your experiences, your relationships, your style, your traits all offer something as unique as your fingerprint to the team?

(3) Amplify Other Voices: How do I react to a perspective that’s different from mine? How can I amplify minority perspectives instead of drowning them out?

(4) Know When to Say No: What am I saying ‘yes’ to that is diluting my attention and making me a less reliable member of the team? As a leader, how am I diluting the attention of my team members?

(5) Embrace Productive Conflict: What more could I do to get the benefit of productive conflict working for my team? How can I model healthy, open, vigorous disagreement?

This interview by Dr. Duncan was originally published by Forbes where he is a regular contributor.

Latest posts by Rodger Dean Duncan (see all)
0Shares
0 0 0
Posted in Uncategorized and tagged collaboration, Leadership, Teamwork
← The Nuanced Character(s) of Downton AbbeyStar Power: Boost Your Value in the Workplace →
Scroll To Top