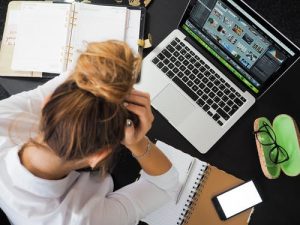 Who hasn’t had to deal with a jerk at work?

If you’ve managed to miss that unfun experience, just hang on. It’ll come. And the good news is that you can make a proactive choice on how to deal with it.

When faced with a problem work mate, you can adopt the approach of one thoughtful professional who said “I’m thankful for all the difficult people in my life. They’ve shown me exactly who I don’t want to be.”

Peter Economy has made a career of studying and commenting on the workplace. You may remember him as the bestselling author of Managing for Dummies or for his leadership columns in Inc magazine. His most recent offering is Wait, I’m Working for Who?!? The Essential Guide to Dealing With Difficult Coworkers, Annoying Managers, and Other Toxic Personalities.

I visited with Peter on the challenge of bad bosses, troublemaking coworkers, lazy and time-sucking team members and other challenging personalities. He offered some excellent advice on how to manage jerk-at-work situations.

Rodger Dean Duncan: You cite research showing three out of four employees reporting that dealing with their boss is the worst and most stressful part of their job, while two thirds say they would gladly take a new boss over a pay raise. If bosses are really that bad, why are they tolerated by the organizations employing them?

Peter Economy: In some cases, bad bosses are themselves high performers—top salespeople or innovative product designers, for example—and the powers that be are afraid the company’s bottom line will suffer if they lose them. So, they do whatever they can not to lose them.

In other cases, it’s a matter of inertia. Unless an organization is totally falling apart because of the bad boss (which sometimes they do!), then dealing with the problem is not a top priority. It’s not until the organization starts losing great people who are not easily replaced that the bad boss gets dealt with. By then, the damage may already be done. As Gallup found, bad bosses are the number one reason why people quit their jobs.

Duncan: You write about 16 of “the most common jerks at work.” In terms of negative impact, what do you regard as the top three—and why?

Economy: My personal top three jerks at work are the following—

Duncan: What are the most productive first two or three steps when dealing with a toxic coworker or boss?

Economy: Disconnect from the emotions you feel because they will cloud your judgment about a situation. Determine exactly what the toxic person is doing to get a reaction from you, then refuse to play their game any longer. Confront the toxic person and let them know you won’t tolerate their bad behavior. Stand up for yourself and be courageous. If you do, others will follow your example. 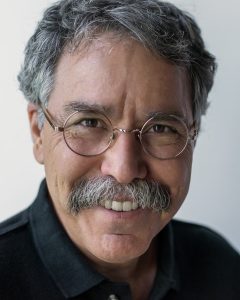 Duncan: Managing workplace conflict is a common challenge. What tips can you offer?

Economy: Whenever you’ve got two or more people in an organization, you’ve got the seeds of conflict. Managing conflict can become a full-time job for leaders.

When you must deal with conflict in your own organization, first be objective. Withhold your judgment until you have the full story from all parties and don’t take sides.

Be neutral. Identify the different emotions in play between the employees in conflict and the underlying needs that drive them.

Help your people see and understand the negative impact they are having on their coworkers, then help them find common ground to resolve the conflict.

Duncan: What steps do you recommend for confronting a toxic coworker or boss in a way most likely to produce positive change rather than merely worsening the bad behavior?

Economy: First, take a big step back and disconnect from the emotions that you feel whenever the toxic person does their thing on you. Call out the behavior—privately, one on one—and don’t ignore it.

If you’re a manager, then explain the negative effect the person is having on the organization and ask them to stop the toxic behavior. If they do, great—not every toxic employee is aware of their bad behavior. If they don’t, then you might need to loop in HR to start progressive discipline.

If the toxic person in your organization is your boss, then again, take them aside and explain the negative effect their behavior is having on the organization and on you personally. If they can’t or won’t stop, then consider transferring to a different part of the organization or leaving it altogether. 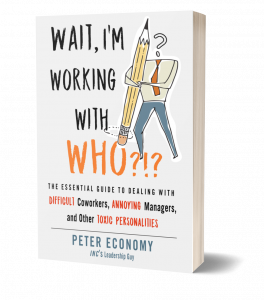 Duncan: Many people seem to allow themselves to be offended or “triggered” by other people’s behavior. How can people raise their own self-awareness so they can avoid falling into the easily offended or victim trap?

Economy: Some toxic people are good at pushing their coworkers’ buttons—really good at it.

Avoiding the victim trap begins with becoming aware of the effect the button pusher is having on you. If you find yourself getting angry or frustrated when you deal with a particular person in the organization, why is that the case—are they pushing your buttons? In some cases, however, victims don’t see the effect these people are having on them—they just react, which is exactly the behavior the toxic person is hoping for. If you refuse to play their game, they’ll eventually get bored and move on.

Duncan: What are some smart ways a job candidate can determine if a prospective job is a good fit?

Economy: Remember that any job interview should be a two-way street. A job candidate should also be asking the interviewer questions to gauge whether the position they are considering and the organization will be a good fit.

They should track down current and former employees of the company and ask them what they think about their organization and its leadership team (LinkedIn is a great resource for this).

And they should be honest in their own assessment of the company and the role they might play in it. Are they truly aligned with the organization’s values and mission? Are they excited about the prospect of working for this company? Do they like their prospective coworkers? It’s a good time to take off the rose-colored glasses.

Latest posts by Rodger Dean Duncan (see all)
Posted in Blog, The Duncan Report and tagged Leadership, Relationships, Workplace
← Burnout? Here Are Some Smart Ways to Lower the RiskHow Humility Can Give You a Leadership Edge →