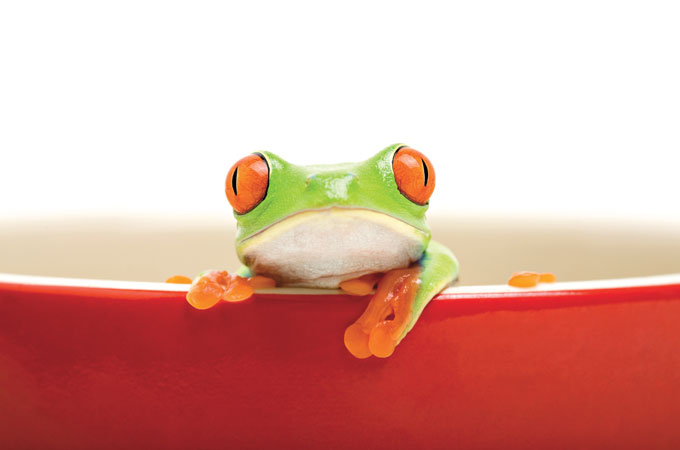 A popular story in the change management community is of the frog in a pot of water. As the temperature slowly rises in one-degree increments, the frog fails to perceive the overall change. Then, before he realizes what’s happening, he’s sitting in boiling water.

The story’s metaphor is an apt warning for leaders who fail to understand and manage the ebb and flow of growth in their organizations.

Les McKeown, who has started more than 40 companies and was the founding partner of an incubation consulting firm, is a leading adviser on accelerated business growth. McKeown’s clients range from Harvard University and the U.S. Army to Microsoft and VeriSign. He’s author of the bestsellers Predictable Success: Getting Your Organization On the Growth Track and Keeping It There and The Synergist: How to Lead Your Team to Predictable Success.

I asked McKeown to share his views on leadership and the evolutionary stages of a growing business.

Rodger Dean Duncan: “Alignment” and “engagement” are two words that are freely tossed around in many environments. What do these two words mean to you? Do you regard them as related or mutually reinforcing?

Les McKeown: Both “alignment” and “engagement” are horribly misused words these days. Alignment means something very specific: You can tell an organization is aligned when every individual on the front line knows how and why each non-trivial daily action that they take contributes to the achievement of the organization’s overall goals. Engagement deepens alignment. The more an individual is engaged, the more discretionary effort they will apply to those everyday actions. So naturally, the two are related—engagement deepens alignment, and alignment ensures that engagement isn’t misdirected.

Duncan: You use the term “Whitewater” to describe one stage of organizational growth. What exactly is Whitewater? How do companies get into that stage, and how can they get out of it?

McKeown: Whitewater occurs when an organization reaches a stage of complexity where success cannot be achieved merely by innovation and improvisation—it’s the point where the implementation of systems and processes is required to allow the organization to scale. The Whitewater stage almost always occurs after the early, “Fun” stage, when a prolonged period of growth and success has been achieved through sheer effort and improvisation and without many systems and processes. So getting out of Whitewater mostly requires a change of mindset on the part of the senior managers. Not just recognizing the need for, but actively embracing the need for systems and processes doesn’t come naturally to Visionary founder/owners who have until that point prided themselves on doing precisely the opposite.

Duncan: You write about “Treadmill” as that stage of organizational development characterized by over-management and over-systemization. What does this look like, and how can leaders navigate out of it?

McKeown: Treadmill is the mirror opposite of Whitewater. It’s a later stage where the organization becomes over-dependent on systems and processes, and as a result starts to become arthritic and bureaucratic. Getting out of Treadmill similarly requires an attitude adjustment—this time, easing up on the dependence on systems and processes for success, and re-injecting vision, creativity and innovation into the organization. Often by the time the organization has reached Treadmill, the more visionary leaders have departed or been silenced and the business is being run more by what I term Processor leaders. Getting the balance right between Visionaries and Processors is the key to attaining what I call Predictable Success—the peak stage of development, which comes between Whitewater and Treadmill.

Duncan: When performance lags, many well-intentioned leaders involve their people in some sort of “team improvement” process. Unfortunately, the improvement (if it occurs at all) is often short-lived. What do you see as the most common cause of this gap between aspiration and reality, and what’s a good approach to closing the gap?

McKeown: Lack of change at the top. Almost always when the C-suite dictates the need for “team improvement” processes, the root problem lies in the C-suite itself. If leaders don’t change their own styles to reflect the changing needs of the organizations they lead over time, no amount of boot camps will change the underlying problem. We teach the need for leaders to develop what we term a Synergistic leadership style—one that evolves over time as their organizations evolve.

Duncan: Leadership theories and models are popular topics among social scientists, academics, consultants, and would-be practitioners. What do you think effective “leadership” is, and what do you see as flaws in some of the more common definitions?

McKeown: Leadership is any act that helps two or more people get closer to achieving a common goal. Simple as that. I’m personally not that concerned about the impact of social scientists and academics. Frankly, the percentage of people impacted by them is tiny. I’m much more disheartened by the impact of the media that focus on a small sliver of leadership—the heroic leader—because it sells more column inches and page views. Reading about heroic leaders—be it Captain Sully, or Richard Branson—is fun and inspiring. But it numbs us into believing that leadership is a rare act undertaken only for the elite few, when in fact every day, ordinary people commit what I call “not-so-random acts of leadership” that help two or more people (be it their family, their kids’ soccer league, their business, their division, department, project, group or team) achieve their common goals.

Duncan: Whether in a local community or school setting or in a more public arena like politics or corporate governance, “emergent leadership” (exercised by someone who may not have the title but who has the will) often breaks the logjam of complacency or inertia. What are some of the behaviors and practices that make this possible?

McKeown: Obviously the democratization of information through social media has helped. As more people share what they can and are doing to help their group or tribe achieve their common goals, other people are encouraged to do the same. Although social media gets a deservedly bad rap for often being trivial and mundane, it is increasingly acting as an effective counterpart to traditional media that too often focus only on either eyeball-grabbing stories of heroic leadership (see above) and/or reporting on the egregious failures of what we might call ‘traditional/formal’ leadership, like the U.S. Congress.

Latest posts by Rodger Dean Duncan (see all)
0Shares
0 0 0
Posted in Blog, The Duncan Report and tagged Alignment, engagement, Leadership, Performance, Strategy
← Taking (Many Literal) Steps to EngagementElephant in the Room? Name It and Tame It →
Scroll To Top