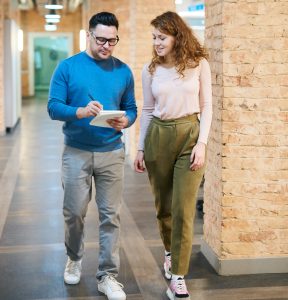 Unless you’re hiding under a rock, you’ve likely heard of servant leadership.

In a nutshell, servant leaders focus primarily on the growth and wellbeing of people and the communities to which they belong.

Traditional leadership often involves accumulating and exercising power by someone “at the top of the pyramid.” Servant leaders, on the other hand, put the needs of others first. They’re not worried about title or position. They focus on getting important things done through the development of others.

The whole concept may seem a bit quaint in a world with so many high-profile examples of power-hungry, attention-grabbing people.

But for decades, Ken Blanchard has been at the forefront of the servant leadership “movement.” In addition to being a sought-after speaker and consultant, he’s authored or co-authored more than 60 books. Some of them have sold millions of copies.

Most recently, Ken has teamed up with his colleague Randy Conley to offer Simple Truths of Leadership: 52 Ways to Be a Servant Leader and Build Trust.

This is not just a “feel good” book, although focusing on true principles does feel good. The book is chock full of tried-and-true practices for exercising honest influence with the people and causes you care about.

This is a book that deserves a close reading. And be sure to have your highlighter handy.

My conversation with Ken and Randy uncovers some nuggets you can put to immediate use.

Rodger Dean Duncan: Will Rogers famously said that “common sense ain’t all that common.” You allude to that idea in your book’s tagline of “Making Common Sense Common Practice.” Why do sensible leadership principles seem to be so elusive for some people?

Ken Blanchard: Too many leaders get caught up in urgent but unimportant tasks. They forget to walk their talk and apply basic leadership principles in the workplace.

Effective leadership is about implementing everyday, commonsense practices that will help your organization thrive.

Duncan: Effective leadership, you say, is an inside job. Tell us about that.

Blanchard: Servant leadership starts on the inside—it’s about having a servant’s heart. That doesn’t mean you let your people walk all over you; it means you care about them as individuals, respect them, and empower them to make decisions. They will feel cared for and needed and will turn around and treat your external customers the way they’ve been treated. It’s the best way to lead if you want to create both great relationships and great results. 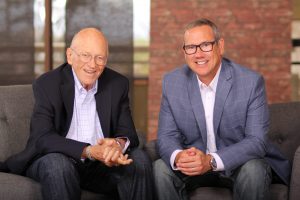 Duncan: How does a leader’s “catching people doing something right” help an organization develop a high-performance culture?

Blanchard: That phrase has been around since Spencer Johnson and I wrote The One Minute Manager in 1981. First, you work with people to set goals and make sure they know what a good job looks like. Then, when you catch them doing something right, give them immediate, specific praise. It’s a powerful way to reinforce good behavior and move people closer to their goals.

Working side by side with people this way builds trust and keeps the lines of communication open. You get to know their strengths and help them perform at their highest level.

Duncan: What role does personal humility play in a leader’s effectiveness with others?

Blanchard: Humility in leadership is when you realize that leadership is not about you, it’s about your people—serving them and helping them achieve their goals. Humble leaders share information about themselves and get to know their team members. Being vulnerable in your leadership helps people relate to you as a person and creates a real sense of connection.

Duncan: How can involving people in planning a change initiative help build support for the change and diminish resistance?

Blanchard: We’ve all heard about how resistant people are to change. But what folks actually struggle with the most is the feeling of being forced to accept something they didn’t know was coming.

People are less likely to resist a change when they have some understanding about why the change is needed and what the benefits will be. Listen to your people. Address their concerns about the change and solicit their ideas. The more involved they are in the process, the more open they will be to accepting the change and encouraging their peers to do the same.

Duncan: You use a SERVE acronym to illustrate how you believe leaders should operate. What specific behaviors does that acronym represent?

Blanchard: Mark Miller and I presented the SERVE model in our book The Secret: What Great Leaders Know and Do. Leaders who want to serve follow these five steps:

Duncan: You quote Ralph Waldo Emerson as saying, “Self-trust is the first secret of success.” How can people evaluate their own levels of self-trust?

Randy Conley: Leaders who have a high level of self-trust have a confident belief in their leadership mission. One way for you to get to know yourself—and to enable your people to know what kind of leader you are—is to create your Leadership Point of View (LPOV). Your LPOV is a written manifesto that captures the key people and events in your life that shaped your beliefs about leadership. It covers the lessons you’ve learned, the values you choose to lead by, and the expectations you have of yourself and others.

There is a two-fold reason why a personal mission statement is the first dimension of leading with trust. First, if you don’t know where you’re going as a leader, why should anyone place their trust in you? People trust leaders who are clear on their beliefs, values, and priorities. Second, having a clear mission allows you to lead confidently and authentically, with a sense of purpose and direction for your life. Trust in your mission translates into others trusting your leadership.

Duncan: It’s been said that “There’s nothing so unequal as the equal treatment of unequals.” At a time when there’s so much emphasis on fairness, how can a leader effectively avoid the one-size-fits-all approach to team members?

Conley: One of the most unfair things a leader can do is give everyone the same broad-brush treatment. Most leaders default to treating everyone the same because it’s the path of least resistance—the leader doesn’t have to worry about being accused of playing favorites. In reality, it’s a cop-out.

The best way to lead is according to each individual’s situation. For example, you can’t give someone who is brand new to a task the same leadership style you give to someone who has been doing that task for years. One person needs specific direction on the how and why of the task, and the other person can be delegated to and left alone. The best leaders match their leadership style to each person’s development level on a particular task or goal. 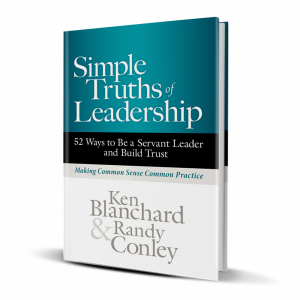 Duncan: What can leaders do to help build a culture where people do the right things even when nobody is watching?

Conley: In today’s hybrid workplace, it’s more important than ever to build trust with your people so they are secure in their ability to get their work done without a leader looking over their shoulder. Empower your people so they will perform just as well, if not better, on their own as they do when you are present—because they know you trust them, and they want to live up to the standards you have demonstrated.

So, provide your team members the direction and support they need to accomplish their goals, let them know you’re there if they need help, then step aside and watch them shine!

Duncan: Apologizing, you say, is not necessarily an admission of guilt, but is an acknowledgement of responsibility. How can a leader use that principle in building and maintaining trust with team members?

Conley: It’s not easy to apologize when you know you haven’t really done anything wrong. But there are times when a leader must take responsibility for improving a relationship in order to allow it to move beyond the situation at hand. Sometimes that requires an apology.

In this case, the leader is called upon to exhibit the emotional maturity to prioritize the long-term health of the relationship over the need to be right—which is driven by ego. This concept also comes into play when you are the leader of a team, and the team drops the ball. It’s best if you take the blame on behalf of your team members.

Servant leaders give their team the credit when they succeed and take personal accountability when they fail. It’s one of the responsibilities of leadership.

Duncan: Some people seem reluctant to forgive others for real or imagined wrongs. What’s your advice to them?

Conley: When you choose not to forgive someone, it doesn’t hurt that person. It just hurts you. It disrupts the flow of work, causes negative thinking on both sides, and limits your ability to lead effectively.

Think of it this way: Your response shapes your reputation. Do you want to be known as a person who leads at a higher level or one who holds grudges? Forgiving someone allows you to move forward in healing and hope. It’s about looking to the future. You’ll feel a weight lifted from your shoulders. Choose forgiveness.

Duncan: At a time when so many people work remotely and have only rare in-person interaction with their colleagues, what are some best practices for building trust?

Conley: You don’t have to be face to face to build trust. It’s all about frequent, authentic communication. One of the best ways to stay in touch with your people is to have regular one-on-one meetings where you let them set the agenda. I like to say that leaders can build trust by “keeping it REAL”:

Latest posts by Rodger Dean Duncan (see all)
Posted in Blog, The Duncan Report and tagged Leadership, Servant Leadership
← How True Accountability Is About Choice, Not BlameYou Really Want to Get Better? Take Charge of Yourself →