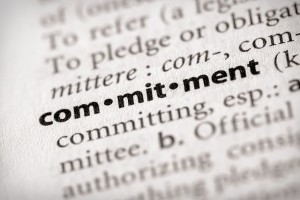 It’s that time of year when many people are making resolutions. But as most of us have discovered, resolutions can quickly fade away and we find ourselves with the same old patterns, habits, and results. Groundhog Day all over again.

Leading effectively is a challenge under the best of circumstances. It’s especially so in an environment of change and transition. People are unsure about the future, and this ambiguity feeds the aversion to risk. In such an atmosphere, people need a shepherd, not a sheep herder. They need comfort and confident direction, not a drill sergeant.

This brings us to the issue of compliance versus commitment.

Compliance and commitment are sometimes viewed as “opposites.” In reality, they work best when combined.

I’ve done a lot of consulting and coaching work with the U.S. Nuclear Regulatory Commission. If there were ever an organization whose reason for being is compliance, it would be the NRC. The agency’s role is to formulate policies and develop regulations to ensure safe use of radioactive materials. This is very serious business. And a critical component of the desired outcome of the NRC’s work is strict compliance with policies and regulations designed to protect the public.

But let’s consider another paradigm that’s every bit as important to the work and mission of the NRC. That’s the paradigm of commitment.

Obviously, we want everyone in the nuclear industry to comply with policies and regulations that ensure safety. That is doing the right thing.

At the same time, we want them to operate in compliance—not just because they want to avoid getting written up—but because they understand and agree with the rationale behind the policies, regulations, and stacks and stacks of rules.

Not long ago I was discussing this very subject with a bright young manager at a nuclear power plant. He clearly understood the importance of compliance, but seemed to be struggling with the role of commitment. “What difference does it make?” he asked. “As long as people are doing what they’re told to do, why does it matter what their motivation is?”

I noticed in his office he had photos of his young family. I engaged him in conversation about his sons, aged three and five.

“Do you have seatbelt laws in your state?” I asked.

“Yes, we do. And they’re well enforced,” the young father told me.

“Do you buckle up your boys?”

“Absolutely. They have the best car seats money can buy and I always crawl into the back seat to ensure that they’re strapped in correctly.”

“So you invest that effort to avoid getting a citation from the police?” I asked.

“Why, no. That never occurred to me,” he said. “I buckle up my boys because I love them and want to keep them safe.”

“Ah, ha,” I said. “That is commitment. You’re going the right thing for the right reasons. You’re not motivated by fear, you’re motivated by love—which is a much higher purpose.”

Yes, I know. “Love” is not a word we often hear in the workplace. But we certainly hear a lot of synonyms: “He really has a passion for excellent service.” “Our team gets excited every time we land a new client.” “Customer care is our first priority.”

It’s possible for people to operate out of compliance while they have very little commitment. But the opposite is virtually impossible. If one is truly committed, compliance is rarely an issue. The young father is genuinely committed to the safety of his little boys, so his compliance with safety laws is automatic.

With well-placed modeling, a good leader can instill this distinction in others. In the early 1970s Dr. Henry Kissinger was the U.S. Secretary of State. One day he asked a couple of bright young guys on his staff to draft a white paper for him. In that context, a white paper is a document that describes an important issue, then outlines the options available to the decision maker. The document also includes an analysis of the implications associated with each decision option.

The young staffers drafted the white paper and sent it upstairs to the Secretary of State. The next morning Kissinger summoned the two guys to his office.

“Is this the best work you can do?” Kissinger asked.

“Well, actually, Mr. Secretary, we could provide a bit more data on this section, and we could do a little more research on that section,” came the reply.

“Well, then, please do it,” Kissinger said.

“Is this the best work you can do?” Kissinger asked again.

“Actually, Mr. Secretary, there are a couple of ambassadors we could consults, and there are some data points from another agency we could include,” came the response.

“Well, then, please do it,” Kissinger said.

After the third draft arrived, Kissinger again sent for the young staffers. By now they were probably feeling like truants called to the school principal’s office.

“Now, is this the best work you can do?” Kissinger asked again.

“Yes, sir, it is,” came the reply. “We’ve exhausted every resource available to us. We’ve carefully scouted intelligence briefings, ambassador communiqués and every other piece of pertinent data. This is definitely the best white paper we can produce.”

“Thank you,” Kissinger said. “This time I will read it!”

Henry Kissinger knew the importance of expecting only the best, and he understood the difference between compliance and commitment. It’s a sure bet that from that day forward his two young staffers were committed to the excellence he had a right to demand. Because they feared him? No. Because he helped them understand the importance of their work and the necessity of getting it right.

As any change-friendly leader knows, people may perform temporarily in a certain way because they feel the heat. But the change becomes permanent only when they see the light.

(Note: This piece by Dr. Duncan was first published by Forbes magazine where he is a columnist)