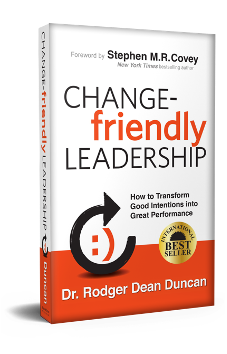 Effective change requires genuinely engaging the brains of the people expected to embrace and even champion the new state of affairs.

In this context, hope is not used as the verbal equivalent of crossing your fingers—“I hope my team wins the game.”

In this book, hope is used to denote people’s heartfelt aspirations, their dreams, even their sense of self. Any change effort that ignores or pays mere lip service to that kind of engagement is destined for disappointment.

What People Are Saying

Rodger Dean Duncan’s CHANGE-friendly LEADERSHIP is a goldmine of actionable wisdom. I return to it time after time for great ideas on leadership, relationships, and how to manage change. With brilliant clarity and memorable real-world stories, Rodger provides a user-friendly guide for employing timeless principles to influence people in a world of constant transition. This is one of the best books I’ve read in many years.

JACK CANFIELD Co-creator of Chicken Soup for the Soul

This insightful book presents a refreshingly positive method for motivating your team (and yourself) through these times of guaranteed change. This is truly a performance enhancer, and a must read for all leaders who want to go from great to greater!

CHANGE-friendly LEADERSHIP is a work of brilliantly memorable models, genuinely compelling stories, and highly practical advice that inspire and energize. It’s a work of optimism, compassion, and encouragement in a time when so much of what we hear about change is pessimistic. It’s the kind of book you can put to use immediately. So, do it!

Leading through change is tough and, now as never before, necessary. Reading Rodger Dean Duncan’s book is like having a favorite uncle—wise, funny, and (yes) friendly—to guide you. Through timeless stories and real examples, he helps you understand what your people need most from you in the midst of change, and how to provide it.

ERIKA ANDERSEN Author of Leading So People Will Follow

As a leader in the corporate world for over three decades, I find myself drawn to books which offer enlightened thinking on leadership that stand up to scrutiny from a practitioner’s point of view and can be put to work on Monday morning. This is one of those books. I highly recommend it.

I am impressed by the utter simplicity and brilliance of CHANGE-friendly LEADERSHIP. To borrow a well-worn political phrase, ‘It’s the relationships, stupid!’ The practices taught by Dr. Duncan can turn any organization around and create happier and more successful people at all levels.

Rodger deeply understands the change process and how difficult it is for people and organizations to manage change. This profound understanding gives him an insightful perspective into how to solve it, i.e., how to engage people’s heads, hearts, and hopes.

Available in hardback, paperback, ebook or on audio, exclusively on