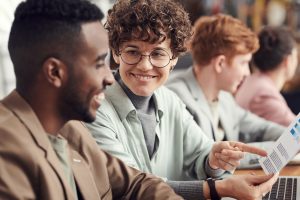 Yes, that’s a cliché. But like a lot of clichés, this one is often true.

Much has been written and even more has been said about teamwork. A large percentage of the rah-rah “motivational” posters stuck on the walls of employee lunchrooms promote teamwork.

Trouble is, just cheerleading for teamwork doesn’t make it happen.

Scott Tannenbaum and Eduardo Salas want to change that. These two psychologists—both with strong academic and consulting credentials—offer great insights in their book Teams That Work: The Seven Drivers of Team Effectiveness.

In addition to coaching at dozens of Fortune and Global 1000 companies, they’ve supported teams that work on oil rigs, perform surgery, engage in combat, treat cancer, parachute into fires, and prepare for future space missions. In other words, they operate in the real world of real issues.

Are you part of something you’re calling a team? Then here are some ideas you can use.

Rodger Dean Duncan: Team effectiveness, you say, has three components—sustained performance, resilience, and vitality. Performance would likely be on most people’s list, but maybe not resilience or vitality. How (and why) did those two components get on your list, and what do they “look like” in an effective team?

Eduardo Salas: Every team needs to overcome challenges and stressors at some point. We noticed that some teams performed well until they experienced their first real set back. In contrast, when faced with a challenge, resilient teams showed less of a performance drop and they bounced back much faster. Resilient teams aren’t impervious to problems, but they are better able to work through challenges, quickly adapt, and mend themselves when needed.

We’ve also observed team leaders who pushed their team so hard to attain short term wins that the team was drained of the energy and resources they needed to take on the next challenge. They lacked vitality.

You can think of resilience and vitality as leading indicators of sustained performance. Without them, it is only a matter of time before a team’s performance suffers.

Duncan: You’ve identified seven key drivers of team effectiveness. How did you compile that list?

Scott Tannenbaum: Each of the seven drivers had to pass two tests. First, there had to be clear, consistent research evidence that it impacts team effectiveness.

Fortunately, there is a large, growing body of team research being conducted globally that we could tap into to supplement our own research. We found hundreds of studies and over 35 meta-analyses. A meta-analysis is a statistical combination of many prior studies, so we are more confident in the results of a meta-analysis than any single study. The seven drivers we identified all have strong research support.

The second test we thought of as the “so what” hurdle. In deciding what to report, we asked ourselves, if a team member or leader knew more about this would it help their team be more successful? If we could offer actionable advice and tips based on the research, it passed this test.

Duncan: What do you see as the four or five most important teamwork capabilities, and what are the observable behaviors associated with them?

Salas: We use the term capabilities to describe the knowledge, skills, abilities, and traits team members need to possess. Some capabilities are specific to a setting, for example health care teams need to know what to communicate when handing over a patient to another provider. But a few teamwork-related skills are fully transportable from team to team. Four basic ones are communication skills, giving and receiving feedback, conflict management, and interpersonal skills (e.g., to regulate your emotions and read how others are feeling).

When team members possess these transportable capabilities, we can expect to see more back up behavior, open communications, learning, and adaptation. They provide a foundation for teamwork.

Tannenbaum: And we’d be remiss if we didn’t add task competence. People need to be able to do their job. It is almost impossible to “team away” big talent gaps.

Duncan: Because cooperation is so crucial to team effectiveness, team members need to have high levels of mutual trust. What are the keys to building and maintaining that trust?

Tannenbaum: Trust is based on judgments of capability and character – do I think you can and will do the right thing? Those judgments aren’t always fair or accurate, and they often aren’t conscious. As a result, you can’t make someone trust you, but you can take actions that increase the likelihood that they will.

One of the biggest trust killers is failing to do what you said you would do, so a key is to avoid making commitments you may not be able to keep. It is better to say “I’ll look into that” than “I’ll take care of that” unless you are sure you can deliver.

Two other helpful actions are to own your mistakes and take an action that is clearly not in your self-interest. Both can help you maintain a positive balance in your trust account.

Duncan: You say learning is good, but “too much” emphasis on learning can be a problem for teams. Tell us more about that.

Salas: A team is rarely at its best on day one. Teams become great by learning and adapting. While most teams need to spend more time reflecting on and learning from their experiences, a few teams go too far.

An over-emphasis on learning is when a team incessantly engages in self-analysis to the point where they aren’t getting things done because they have taken their eye off the prize.

To be clear, most teams need to spend more time on learning and adapting, but we have seen instances where it was taken to an extreme.

Duncan: Team leaders often need to manage conflict. What are your tips on that?

There are three main approaches to handling conflict in team settings. The first is competitive conflict where each person is trying to ensure that their idea wins. The second is avoidance, where team members don’t want to upset anyone, so they don’t speak up…or at least not until they are in the hallway! The third is collaborative conflict where the goal is to ensure the best idea wins. Research shows that teams that engage in collaborative conflict about work related issues perform better.

As a leader, you should be guiding your team to focus on what is right, not who is right and creating an environment where people are comfortable voicing alternative views.

Duncan: Communication is clearly an important ingredient in team effectiveness. But some leaders mistakenly assume that more is better. You suggest that better is better. Please elaborate.

Tannenbaum: Perhaps you have a friend who talks incessantly. He communicates a lot! When he says something important, it might be just after he retold a long irrelevant story, so you are no longer listening carefully. His noise-to-signal ratio is high.

High quality communications are timely and accurate. And research shows that it is the sharing of unique information that enables effective teamwork. Unfortunately, people sometimes fail to share unique information because they falsely assume “everybody knows that.”

Effective teams are often better at “closing the loop,” which means that team members periodically restate what they have heard, allowing the sender to correct any misunderstandings. That way no one walks away wondering, “did he get it?” 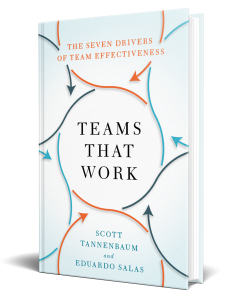 Salas: In team settings it is also important to consider who isn’t in the room. One simple question you should regularly ask is, “Who else should know this?” And as a follow up, “who is going to tell her?”

Duncan: There’s no doubt that team leaders (and teams) get what they encourage—and tolerate. What’s your advice on how maintaining the optimal conditions for excellent team performance?

Salas: “Conditions” begin at the top, so let’s consider this from a senior leader perspective. If you are a senior leader, we encourage you to do an honest self-assessment. You are probably asking your teams to collaborate across boundaries, but are you modeling cross-functional collaboration in your own work? Are you breaking down or promoting silos?

When you communicate about successes, do the stories you tell typically focus on individual heroes or do you acknowledge the people who helped make it happen? Is it always about a star or is the supporting cast also featured?

Do your company’s processes and practices reinforce teamwork? For example, during the hiring process, are applicants asked about their teamwork experiences and skills or simply about their technical skills? When performance is evaluated, rewards are doled out, and promotions are determined, are team players recognized? Are jerks tolerated and promoted if they generate enough revenue?

Tannenbaum: Finally, be honest. Do you ever create teams but provide them with insufficient resources, direction, and autonomy to succeed? When you “starve” teams like this, they fail, and people learn to avoid team assignments when possible. Don’t form teams you won’t commit to.

Latest posts by Rodger Dean Duncan (see all)
Posted in Blog, The Duncan Report and tagged Leadership, Performance, Teams
← Can ‘Doing Less’ Be Smart for Your Business?How Can You Be Sure Your Work Really Counts? →
Scroll To Top