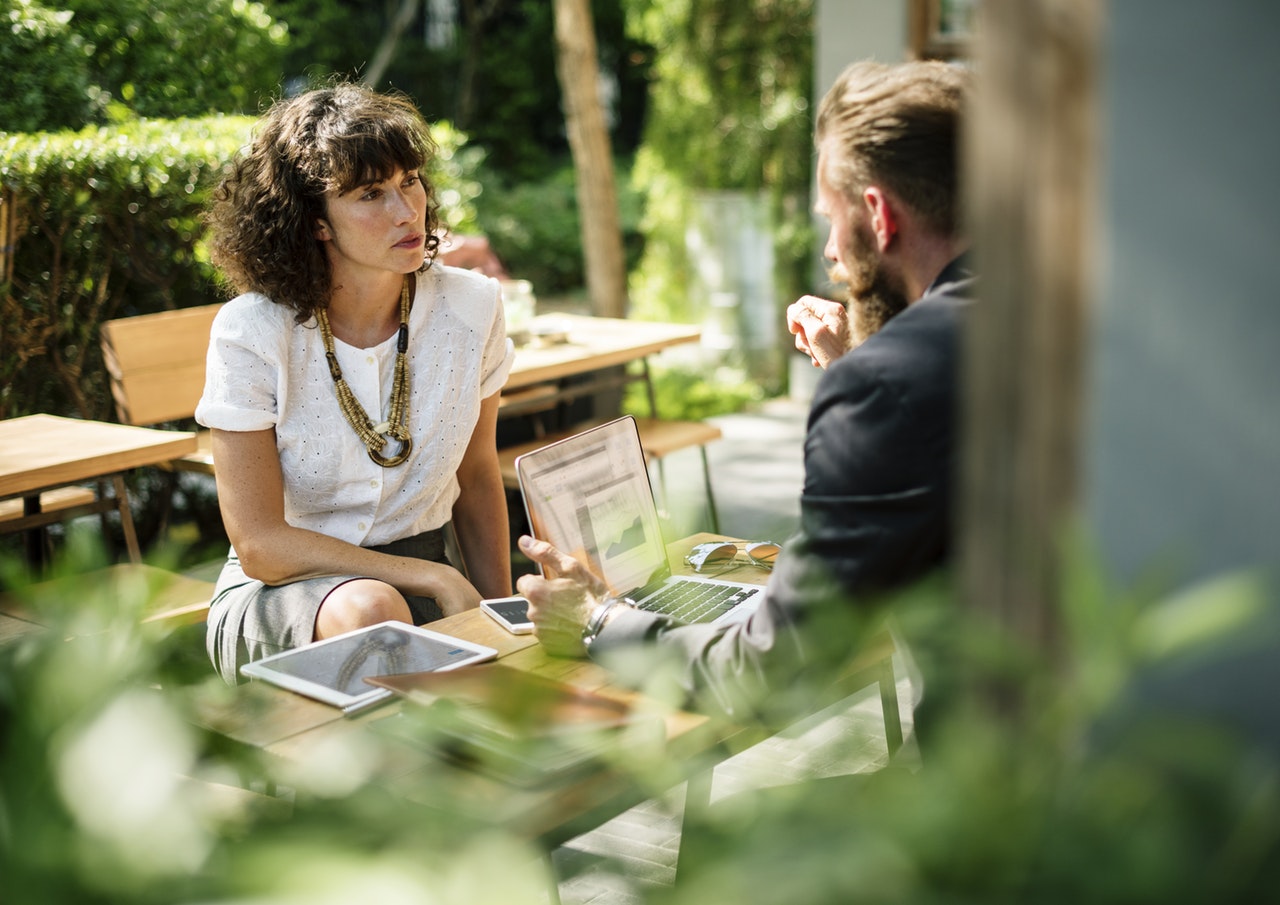 “Accountability” is among the top two or three concerns of senior executives.

Accountability has various definitions, but the word is usually used to denote personal responsibility for getting desired results. It’s an admirable idea, and all good managers and leaders want their people to be “accountable.”

I recently visited a client organization that employs about 1,300 people. By some standards, an employee population of only 1,300 isn’t a big company. But in this particular highly specialized, highly technical industry, 1,300 is about average.

I was called in to work with the senior management team on “communication” issues. At dinner one evening, I asked one of the top executives a pointed question: “Last year, how many of your 1,300 employees received a ‘Needs Improvement’ performance appraisal rating?”

My friend interrupted me in mid-sentence. “Your question was painfully clear,” he said. “Last year, only six of our people received a ‘Needs Improvement’ rating.”

He went on to describe his organization as similar to Garrison Keeler’s mythical Lake Wobegone community where all the men are handsome, all the women are beautiful, and all the children are above average.

“We’re good with technology,” he said, “but we’re not at all good at the straight talk that’s necessary for consistently high performance. Sometimes we dance around or even ignore issues that cry out for attention.”

My friend’s assessment of his organization was right on target. And it underscored the common need (1) to define what accountability really means and then (2) to engage people in ways that win their hearts, minds and commitment. 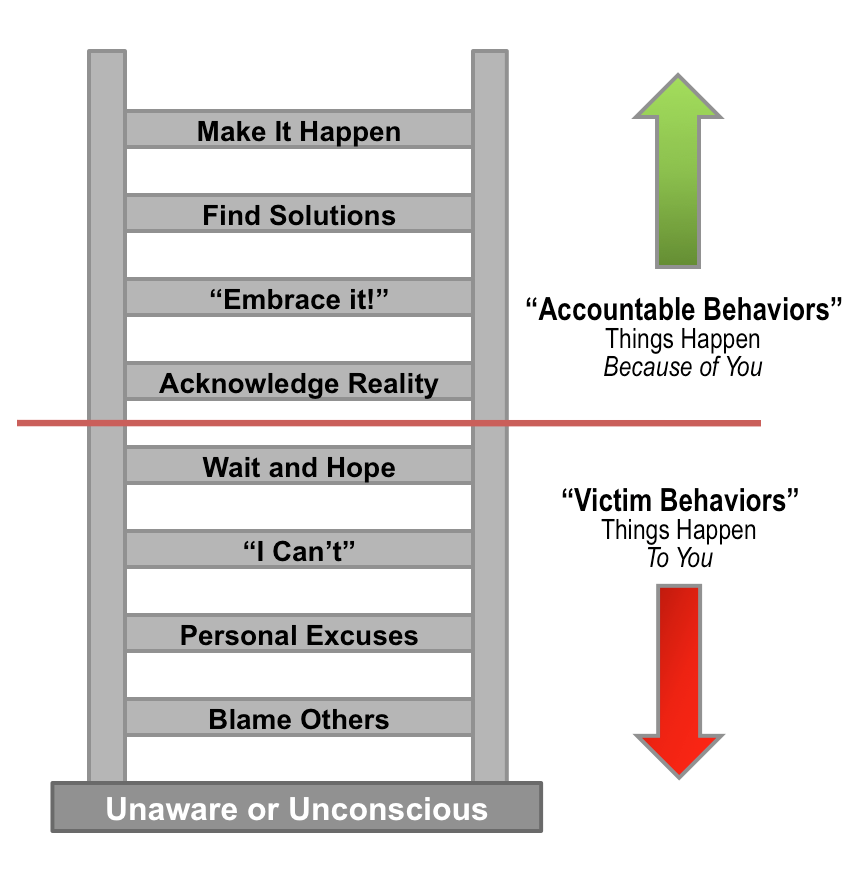 Some of my clients address the matter with something called the Ladder of Accountability.

At the lowest rung on the ladder, people are simply “Unaware” or “Unconscious.” They don’t even know there’s a situation that needs attention.

The next rung on the ladder is the “Blame Others” level. Here’s where we see a lot of finger pointing. When something goes wrong, or fails to go right, people at this level are quick to censure their colleagues. This is the behavior we frequently saw on “The Apprentice,” Donald Trump’s television show in which young professionals fought it out for a big job opportunity. Rather than fixing problems, most of the contestants invested their energy in fixing blame.

Just above the “Blame Others” rung on the Ladder of Accountability are the “Personal Excuses” and “I Can’t” levels. The behavior we see here is sort of an adult version of “the dog ate my homework” syndrome. People talk themselves into believing, for a wide range of imaginative reasons, that they are simply unable to accomplish the task at hand. It’s never their fault, of course, because (they genuinely believe) they are controlled by circumstances.

Next we have the “Wait and Hope” level. Although waiting and hoping are better than blaming and making excuses, this is still a mindset that places the obligation for results on someone else. In fact, all the behaviors on these lower rungs on the Ladder of Accountability are victim behaviors. People who languish at these levels of performance (or non-performance) seem to believe that things happen to them.

At the “Acknowledge Reality” level, people at least have their heads out of the sand. They see the situation for what it is, sort the facts from the fiction, and accept the certainty that something needs to be changed.

An even higher rung on the ladder is the “Embrace It!” level. People operating at this level admit their own role in the problem, then accept ownership of the situation. People who psychologically “own” a problem are much more likely to solve it than people who merely acknowledge that a problem exists. The symptoms of psychological ownership are intense interest, passion, determination, and the persistent investment of energy. Psychological ownership reminds us of the old joke about ham and eggs. The chicken is merely involved, the pig is truly committed.

Just above the “Embrace It! level is the “Find a Solution!” rung on the Ladder of Accountability. Solutions are spawned by commitment to results.

And the highest rung on the Ladder of Accountability is the “Make It Happen!” level. People who operate at this level don’t just talk about results, they get results. Their commitment is relentless (I didn’t say ruthless, I said relentless.)

These “Make It Happen!” people sometimes make the hand-wringers uncomfortable. They not only tend to think outside the box, they often refuse to accept the notion that “the box” even exists. They don’t take no for an answer. They gain special satisfaction in solving problems that others regard as impossible or just too difficult. They’re worth their weight in gold because they know that things happen because of them, not to them.

When performance accountability is important—and when is it not?—a good place to start is with open and honest conversation about mutual purpose and mutual expectations.

What does great performance “look like” to you? What does it “look like” to the person to whom you’re delegating? What are your mutual expectations on deliverables, timelines, budgets, and all the other parameters of the task? Where, when, and how will the accountability sessions occur?

Latest posts by Rodger Dean Duncan (see all)
0Shares
0 0 0
Posted in Blog, The Duncan Report and tagged Accountability
← Workplace Matters: How To Make It GreatIs Your Project Lost In A Black Hole? →
Scroll To Top